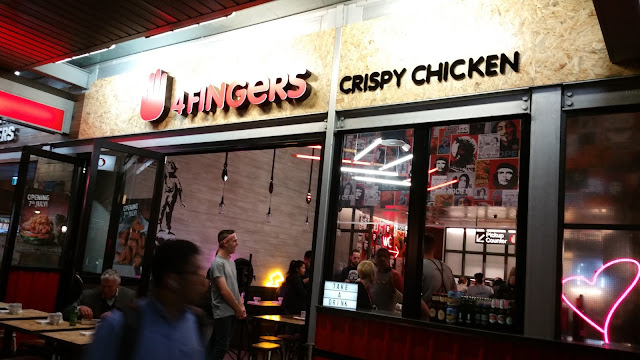 Last week Meatballs and Beef Cheeks and I were invited to attend the private launch party for the opening of largely popular Singaporean Fried Chicken Chain 4 Fingers who have just opened their Brisbane store along Albert Street. 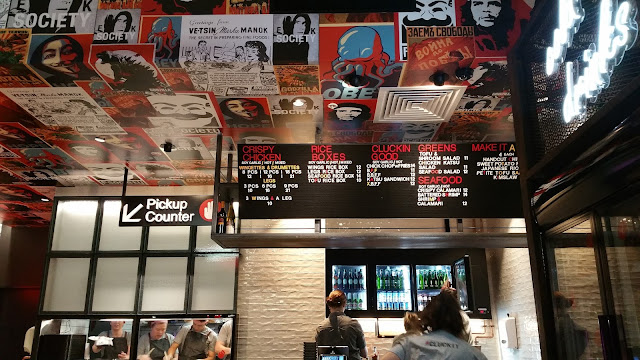 Arriving at the scheduled time of 7pm, we found it to be already bustling with other invited guests, most of whom were instagrammers we had met at other venues. I really liked their decor with a very strong "resistance" vibe, which was the inspiration 4fingers who were founded by four foodie friends wanting to take on the impossible and fight the good fight to disrupt casual dining with their delicious fried chicken. Normally, service would be at the counter, with a variety of chicken, rice boxes, burgers, salads and sides on the menu. 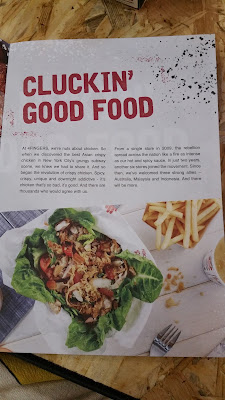 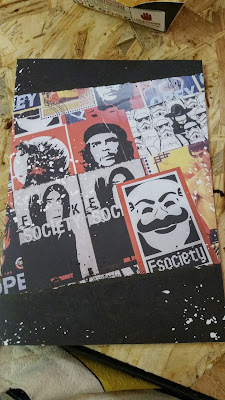 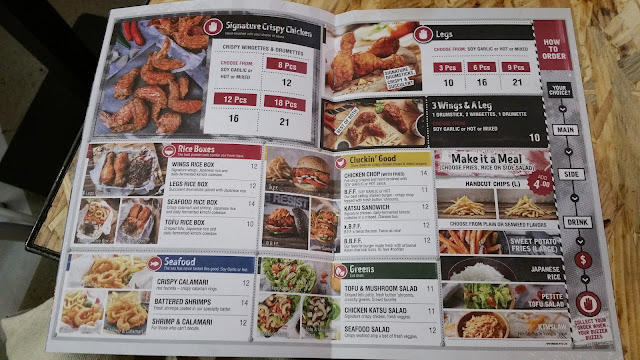 A paper menu was also provided for us, which gave good visual representations of all the dishes, along with a brief company description. 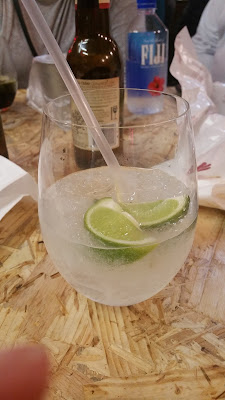 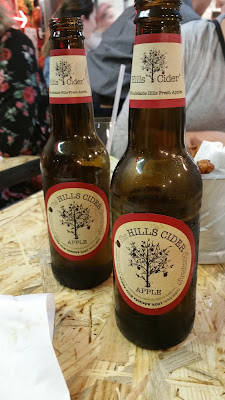 Drinks were obtained a the door and I had the yuzu gin slushee and my companion had an apple cider. The yuzu drink was citrus-y and refreshing, with the extra lime giving it quite a bit of zing. 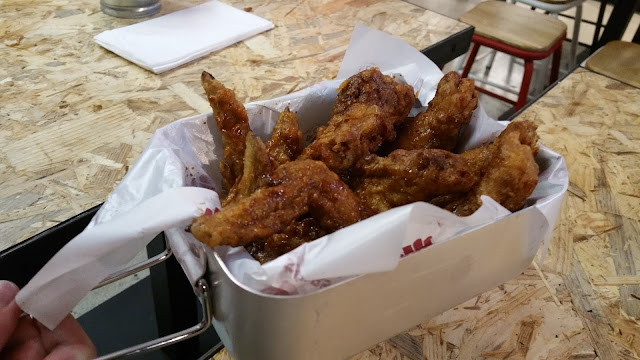 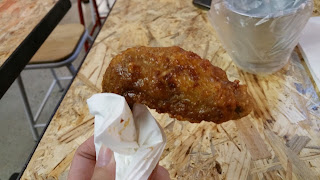 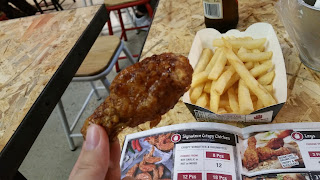 As this was a private event, staff were walking around all evening with serves of their signature fried chicken in little metal baskets. I tried both flavours, being the soy garlic and the hot and spicy. The soy garlic was surprisingly sweet with a sticky honey basting that clung to my fingers and locked the flavours in. The hot and spicy was similar, but with an added element of heat. Both pieces of chicken were very tender, and definitely packed a punch in terms of taste. 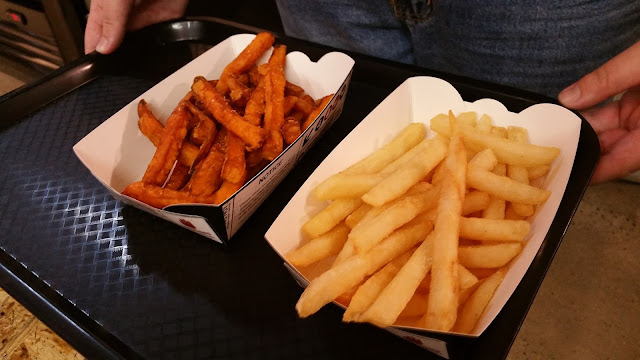 To go with our meals, we also had some regular fries and sweet potato fries. Being freshly made, they were crunchy and fluffy on the inside. I would have liked some sauce or seasoning to make the chips a little more unique and memorable though. Grazing on the foods going around, I then took the time to wander around and appreciate the chefs busily cooking in the kitchen. 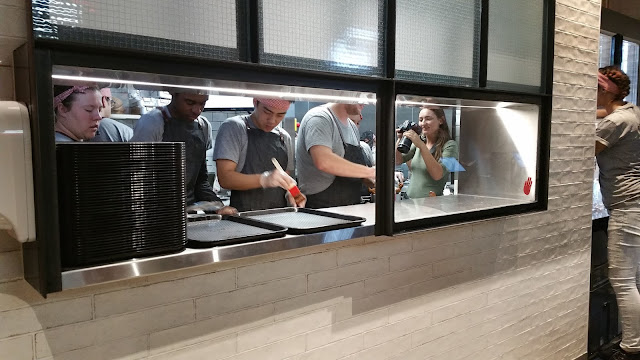 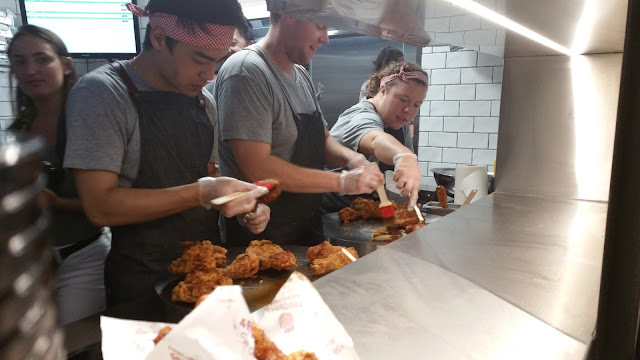 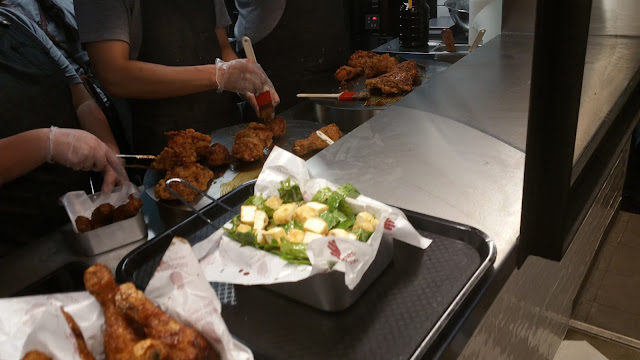 As you can see, all chicken is hand basted, and quite a bit of attention is placed on each piece before it comes out. 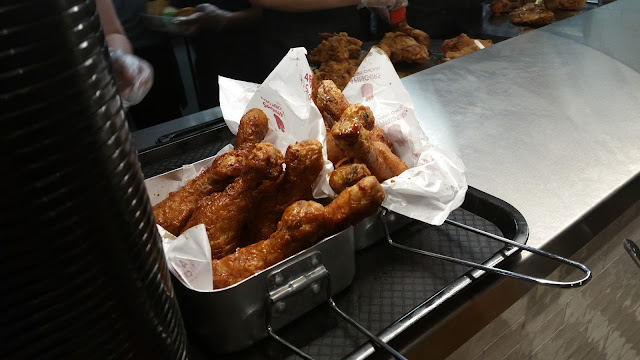 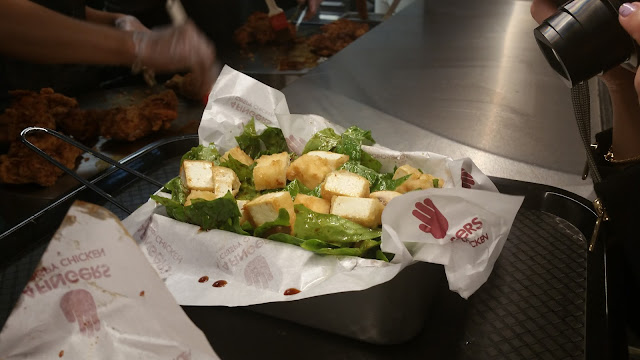 This was the tofu salad, which looked great, but I didn't get a chance to try this time. 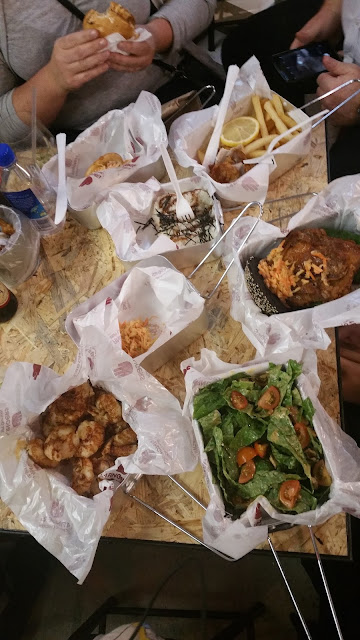 Putting our order through, food came out quite quickly and all came in the paper lined metal baskets. 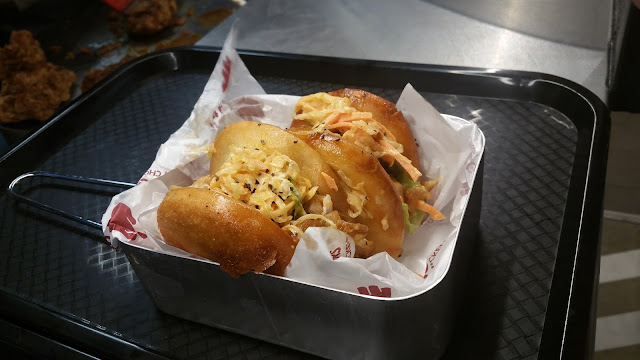 Meatballs and Lady Meatballs both enjoyed a Katsu Sandwich, being a piece of the signature chicken and kimchi coleslaw served in a crispy Chinese style bun. 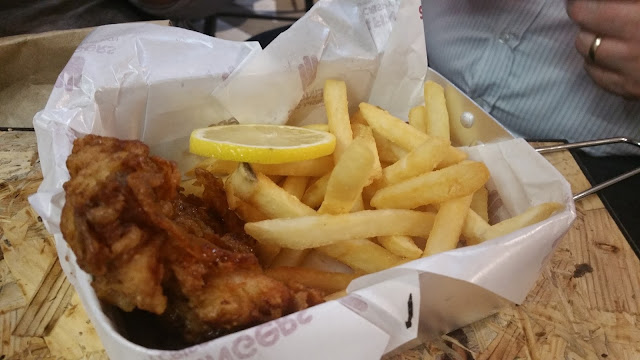 They also had a Chicken Chop with fries which was a huge piece of basted chicken served with a side of chips. It was reportedly boneless and I really regretted not ordering one myself. 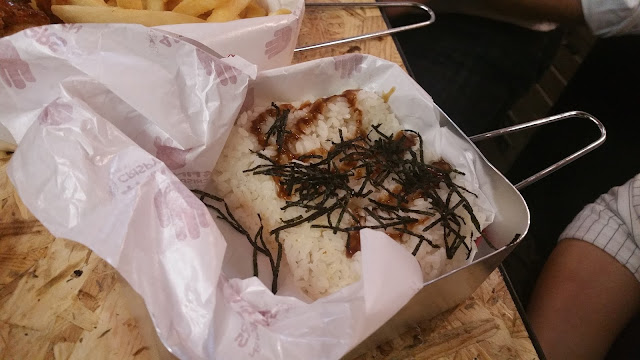 They also had a portion of Japanese Rice, which was topped with what tasted like teriyaki sauce and some shredded nori. The rice was quite fragrant and lightly seasoned with the sauce. I don't think this is an option to try as a snack alone, but rather to be accompanied by their signature chicken. 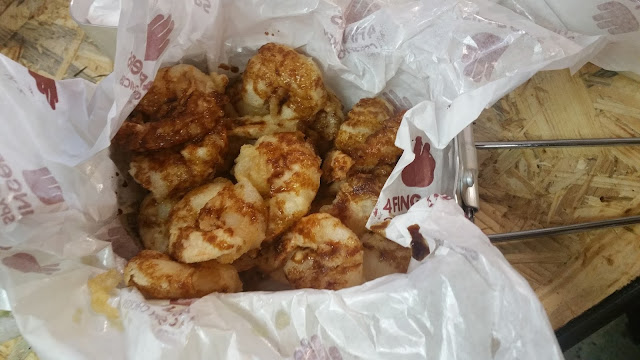 My picks for the night started with the Battered Shrimps. Whilst they had a light tempura batter, this was slightly overcome by the same sweet sauce that was found on the rice. The portion was super generous though, and I did quite enjoy the shrimp. 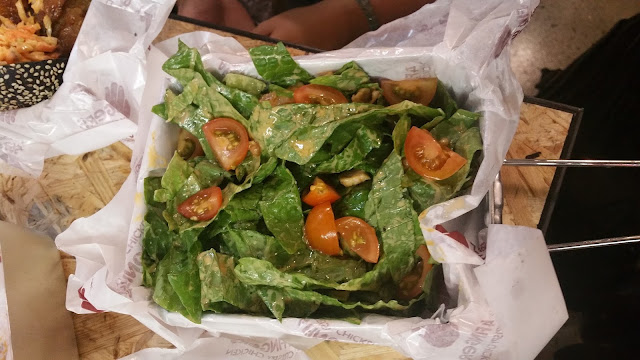 My companion, ever the reformed health nut, went for the Chicken Katsu Salad. Whilst it appeared very green and leafy on the top with lettuce and some tomatoes, there was an abundance of chicken underneath. As with the other dishes that evening, they were very liberal with the sweet and tangy dressing, which my companion really liked. 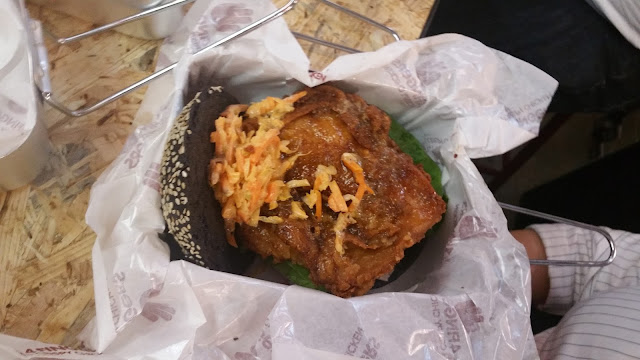 Wanting to try something special, I opted for the massive BBFF Burger, which contained a huge piece of chicken, lettuce and kimslaw, in an Asian Charcoal Bun. All I can say is that the burger was HUGE! It took every effort on my part not to have the delicious sauces dripping all over myself. The bun was definitely novel, but a little dry. This was of course compensated by the chicken basting, and the sweet but spicy whilst creamy kimslaw, also a very novel concept for me. The whole package came together to create a very messy, but satisfying combination.

Espresso & Matcha were invited guests of 4Fingers, but all as always, our opinions remain solely our own.