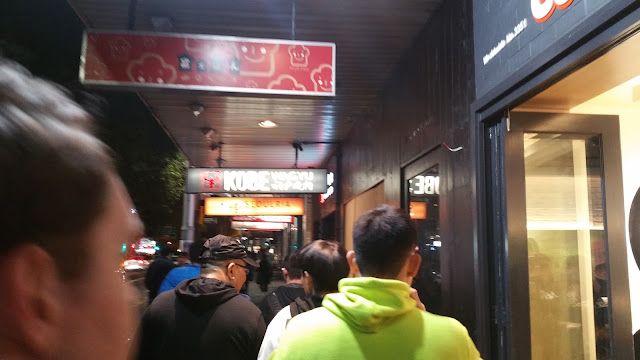 A trip to Sydney with Iron Fist would hardly be complete without my dragging him to enjoy some DIY BBQ. Having received a recommendation from a local friend, we headed off to grab dinner at Kobe Wagyu Yakiniku. 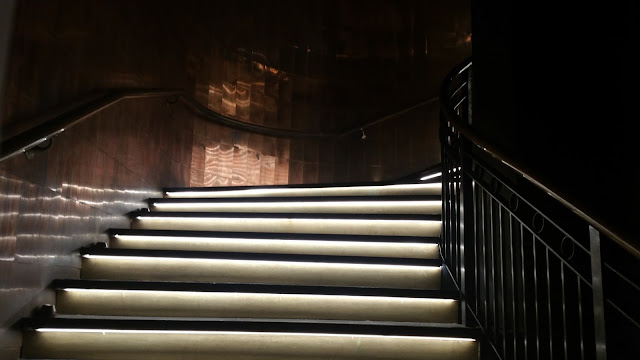 It was situated upstairs off George Street in the CBD. 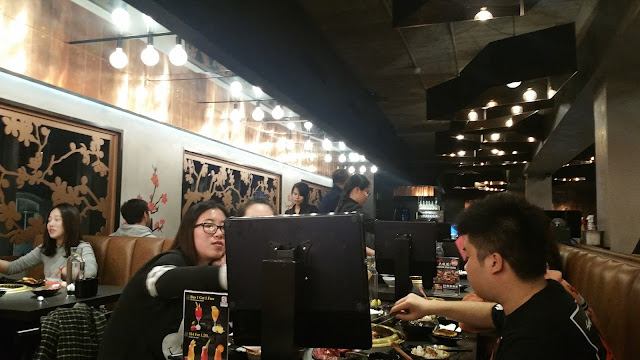 Arriving at 6, we were shown to our table. Despite the considerable price of $80pp the restaurant was at capacity, which was quite surprising for us. 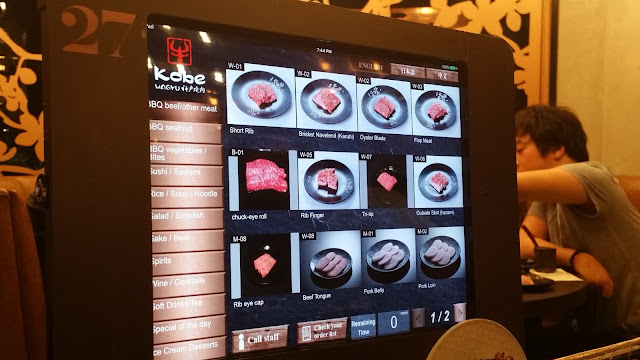 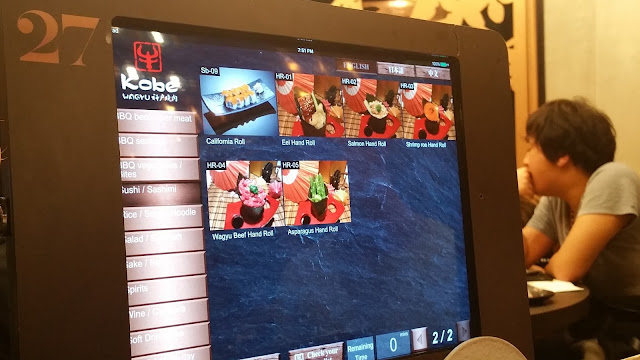 Like all the other Japanese BBQ buffets, ordering was done via the ipad. Service was relatively quick that evening, which was appreciated. 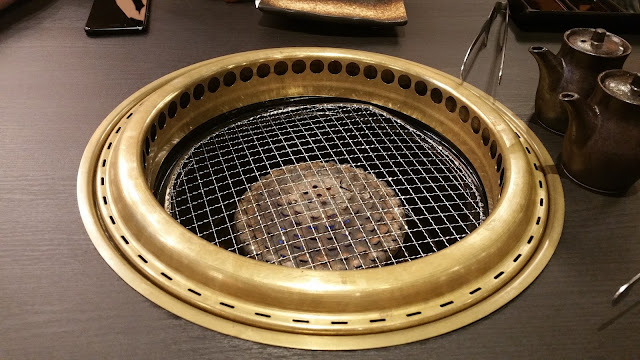 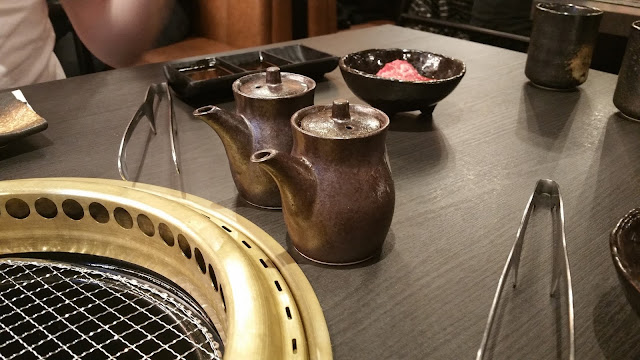 After ordering, the grill was quickly fired up (gas not charcoal), and our sauces arrived. 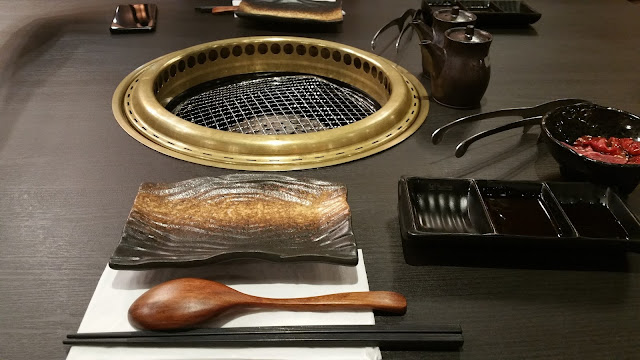 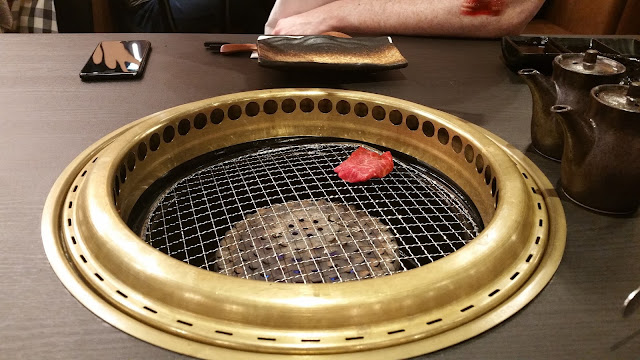 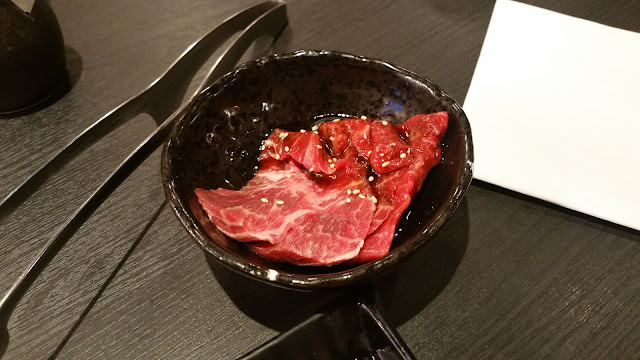 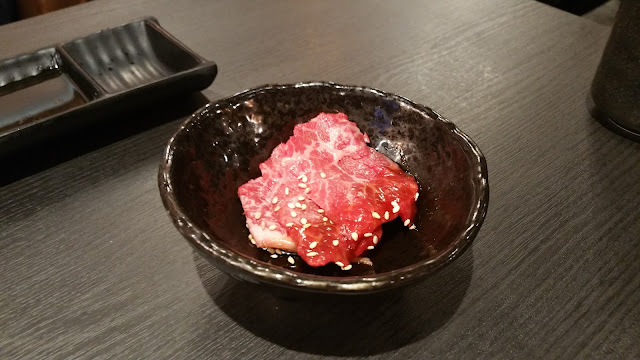 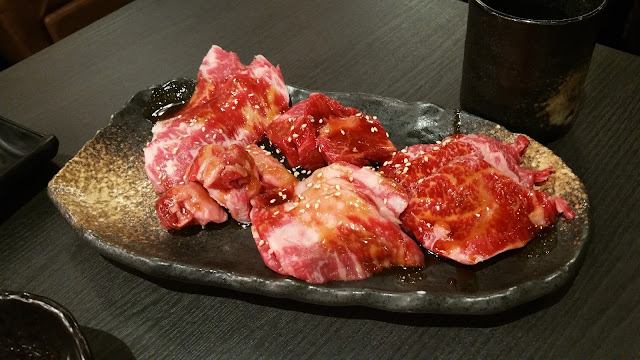 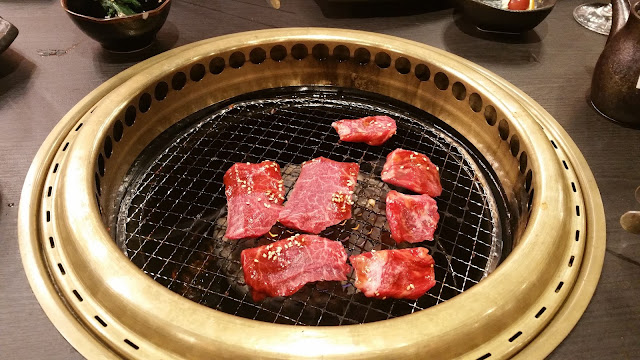 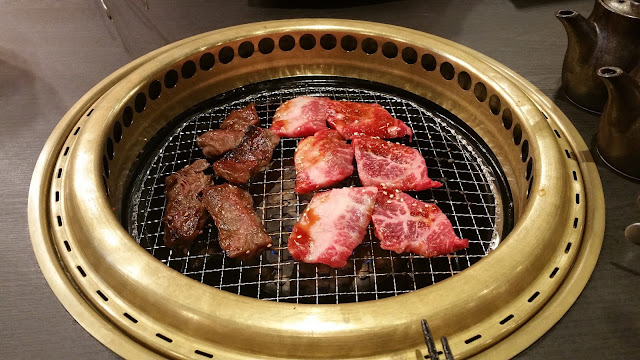 With their extensive selection of meats, we ordered a portion of each different cut of beef. The unfortunate thing was that they were all presented without much of an introduction, so whilst we found some pieces to be tastier than others, we had difficulty in identifying them to reorder. Nevertheless, in general, we found the beef to be very fresh, a little fattier than we would have preferred, but definitely well seasoned with bbq sauce and sesame. 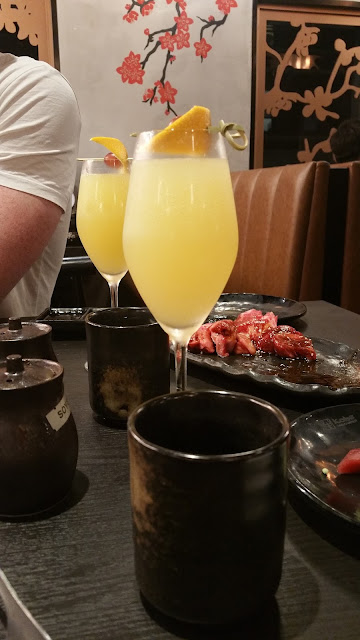 Our drinks that night included the delicious yuzu cocktail, which was crisp and refreshing and also cut through the grease very efficiently without being overly sweet. 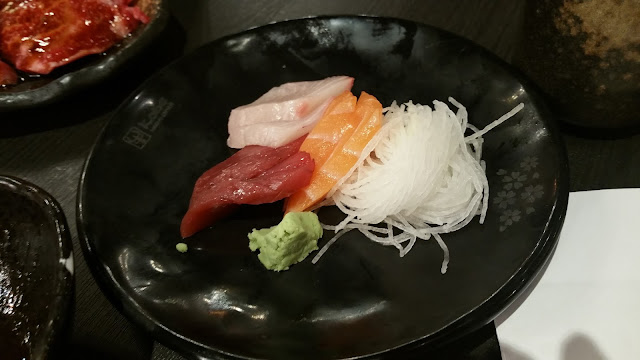 Of course, I couldn't go past the sashimi without ordering a selection of salmon, tuna and kingfish. Unfortunately these were nothing special. They weren't unfresh, but a far cry from the freshness of Sokyo or the fish market. Wasabi tasted a little artificial too, so I didn't go for seconds. 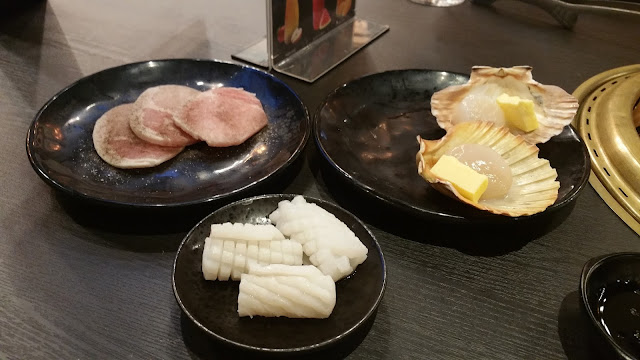 Other things we sampled included the pork, scallops and calamari. 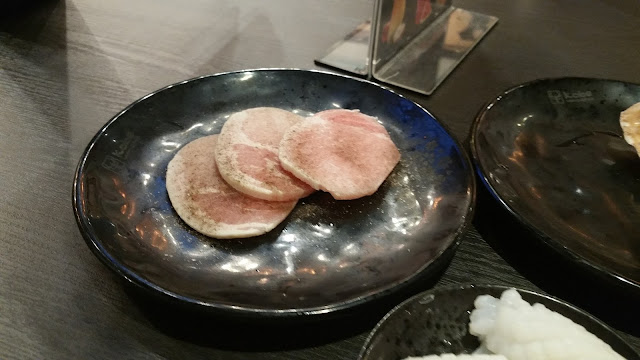 Given how fatty the beef was, I was pleasantly surprised at the relative lean-ness of the pork. It was a little thicker than what we were used to in other places, and was rather tender in texture after grilling. 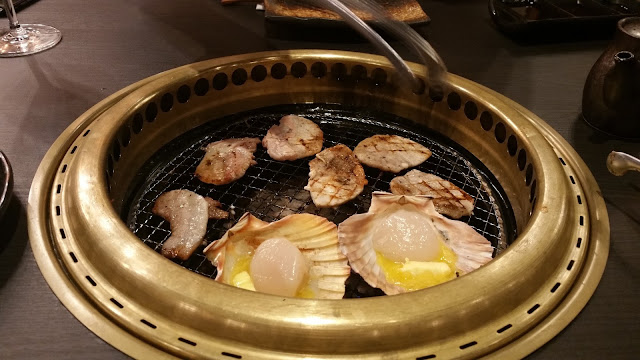 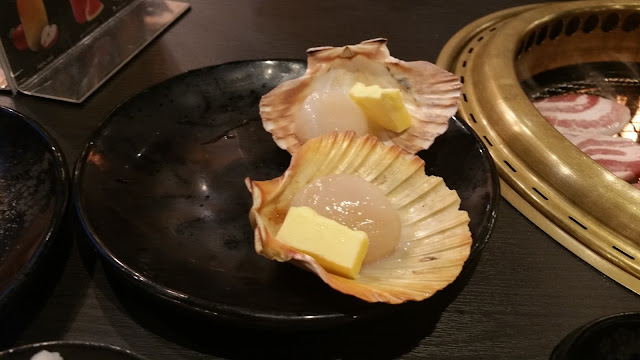 Iron fist also had some scallops which were served with butter (which it was cooked in). It made for a rather light and delicate dish, and the scallops were quite fresh, albeit a bit oily. 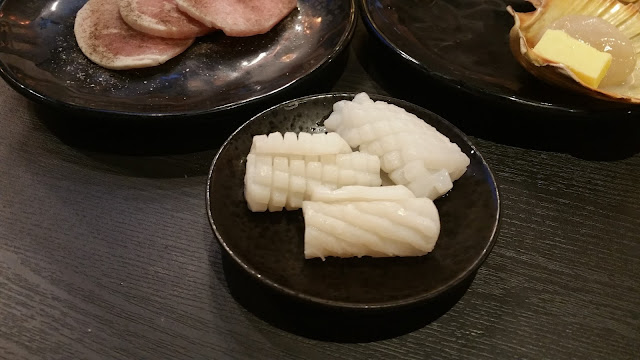 The calamari was not too bad, but a bit chewier than ideal. 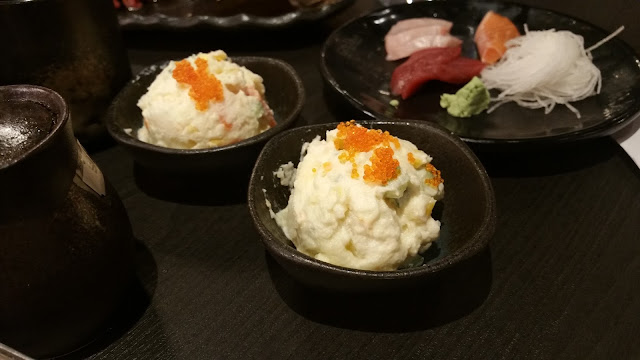 In terms of non meat options, we had some potato salad to share. This was remarkably creamy and we both really enjoyed it. I particularly liked the tobiko on top, which gave it a nice added crunch. 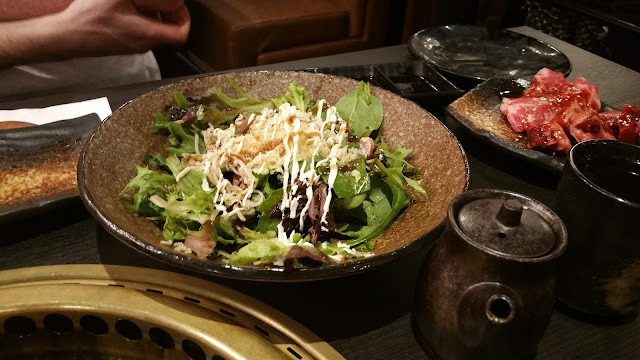 To share we also had a green salad, it came fresh and crispy topped with some bonito flakes and kewpie mayonnaise. Was light and refreshing, and the serving was generous. 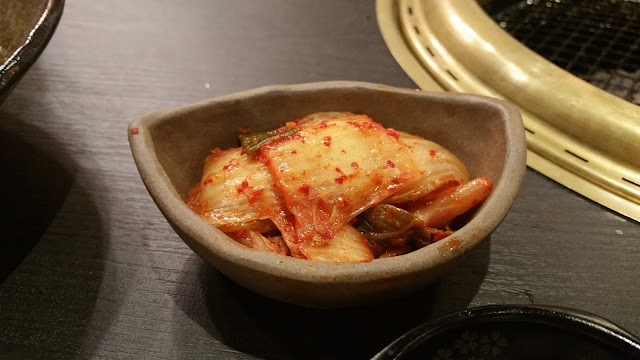 I also ordered a small portion of kimchi. This was pretty standard tasting, with a light spiciness and the freshness of cabbage, although nothing particularly made it stand out compared to other ones I've had. 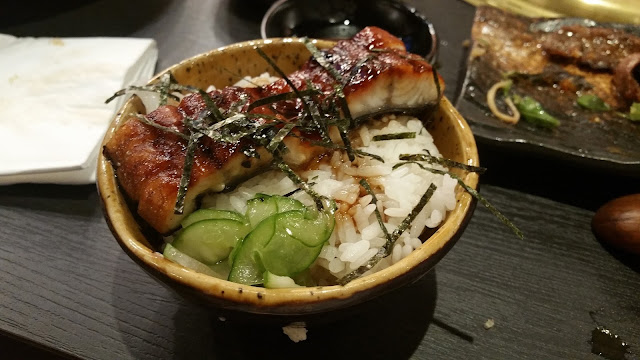 Whilst I wouldn't normally order rice in a buffet situation, the promise of unagi rice definitely convinced me otherwise. I was pleased that it was only a small bowl, and that the rice was short grain. The unagi was nicely caramelised with a crisp bottom and a soft well marinated top. The sauce had infused into the rice also to give it extra taste. 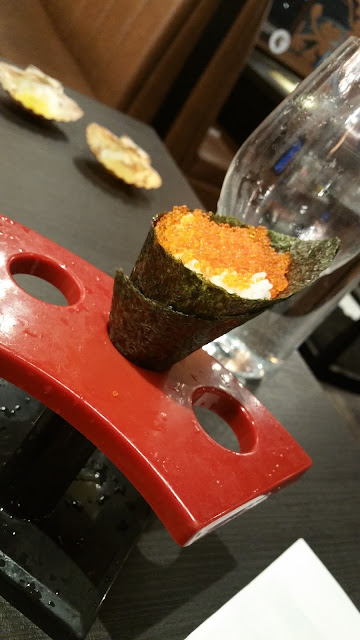 To finish off, I had a tobiko handroll, which also had rice, but was also quite small. I loved that the hand rolls were freshly made, as it ensured that the nori was amply crispy. The tobiko was reasonably generous in portion, and the rice had a good texture to it. 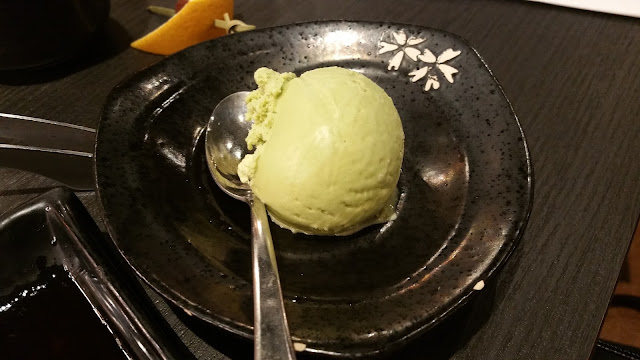 Rounded off the meal with a scoop of green tea ice cream. This proved to be very smooth and creamy but somewhat light on matcha taste. Still, I enjoyed it.