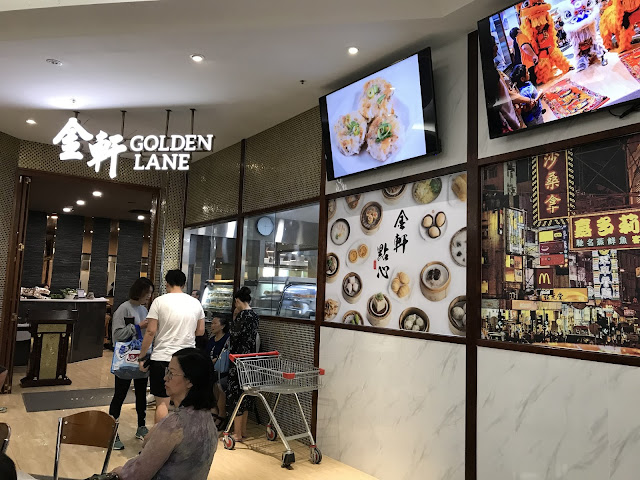 Was recently invited by Golden Lane to try out their Yumcha offerings with The Tomcat Family. With my sub par experience last time, I thought it would be a nice opportunity to see if their standards had improved. 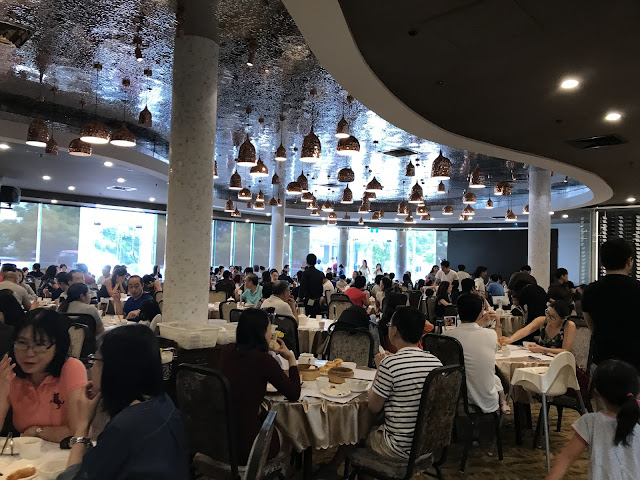 Our first concern for the day was the apparent lack of organisation. Despite receiving written invitation from the owner, staff were not informed of this, which resulted in considerable confusion and also a very long wait for a table on our part. 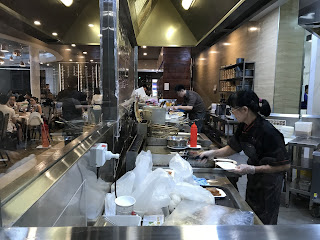 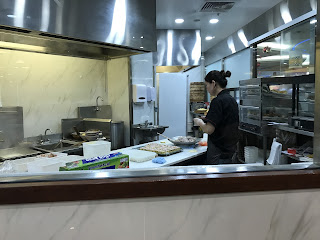 At the very least, I was able to be distracted by watching the chefs making the dim sim dishes. 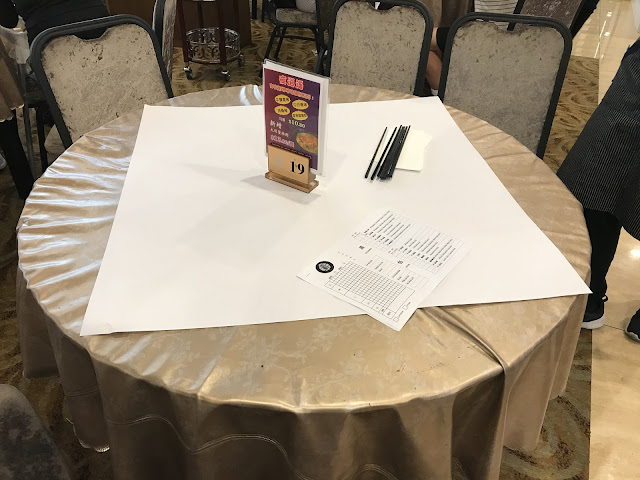 After a considerable wait, we were finally given a table. Like last time, the table cloth didn't get changed upon our arrival, but at least they had a fresh, clean piece of paper on top. 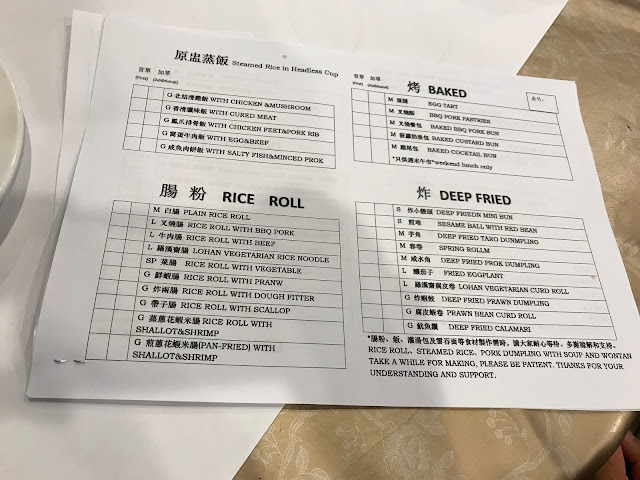 Trolleys were kept to a minimum, so we ordered via tick sheet. After last time, I noted that the variations were substantially increased and a lot more standard fare was included in the menu. 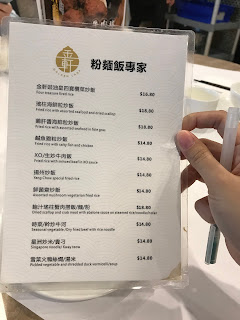 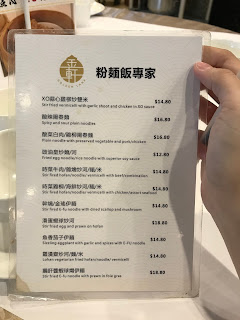 As usual, there were also options for larger dishes of rice or noodles when something more substantial is required. 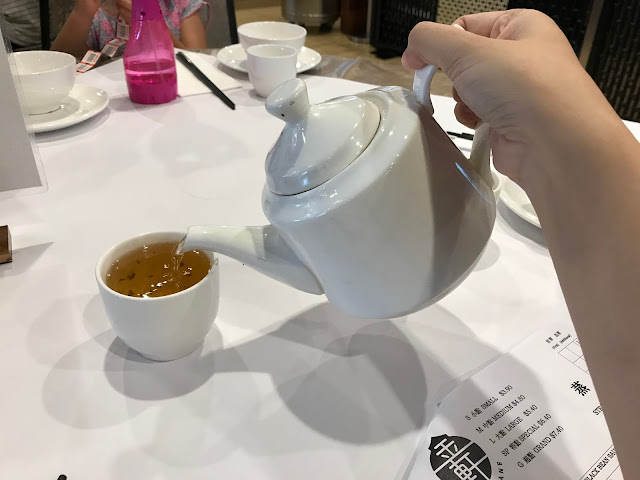 Kicked off the meal with a pot of Jasmine Tea. It was boiling hot, but the fragrance was still lacking, even after sitting for a while. 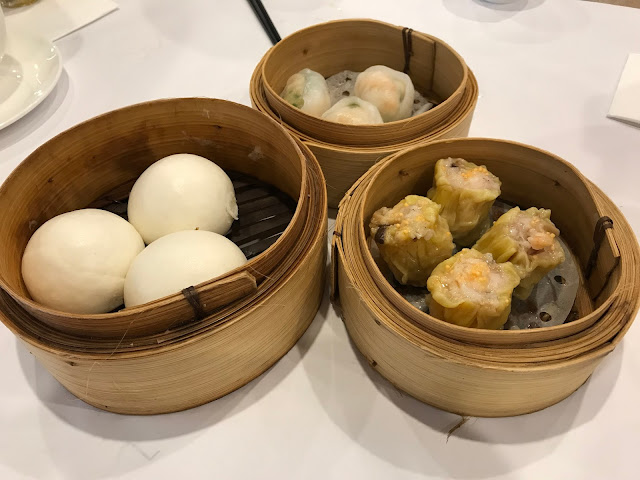 First to arrive from our orders was the steamed dishes. 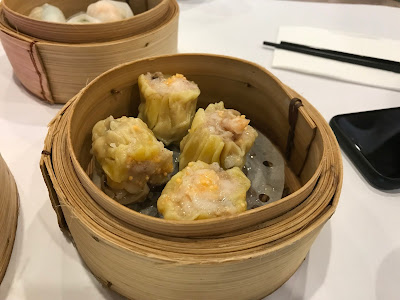 This was the Siu Mai. It came sprinkled with crab roe on top. Presentation was somewhat deficient, but the flavours were reasonable, and the crab roe was quite crunchy. 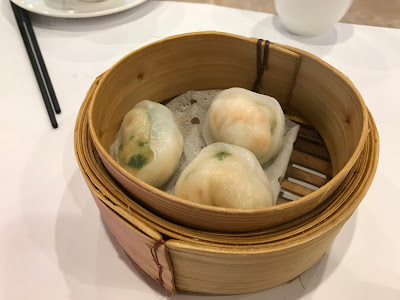 Next up were prawn dumplings, which I found to be a little overcooked, and the skin erred on the thicker side. 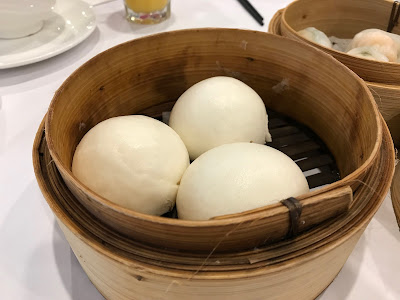 We also had a serve of custard buns. Unlike the steamed dumplings, they weren't as warm as we would have liked, and the buns could have been a little fluffier, but the custard was reasonably smooth and sweet. 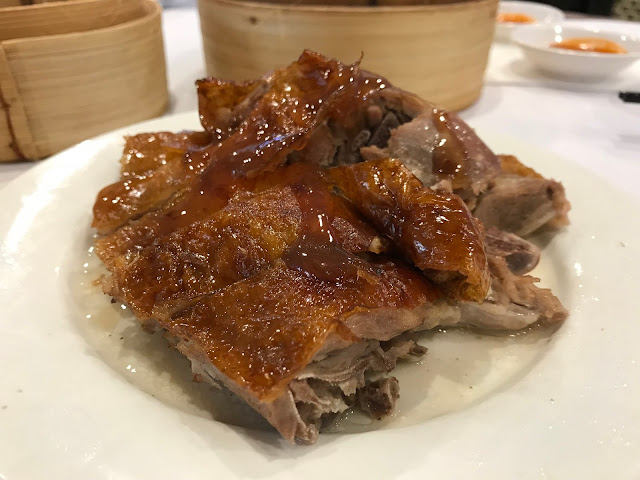 Next up we had a dish of roast duck. Sadly this was a bit disappointing, in the fact that it came cold, and was mostly just bony parts of the back, without any thigh or breast fillets, nor was the skin crispy at all. 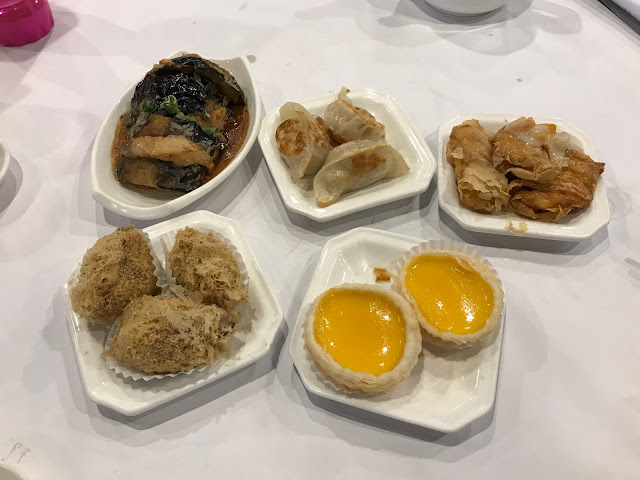 Fried foods and pastries came up next, and we had hoped this would be better. 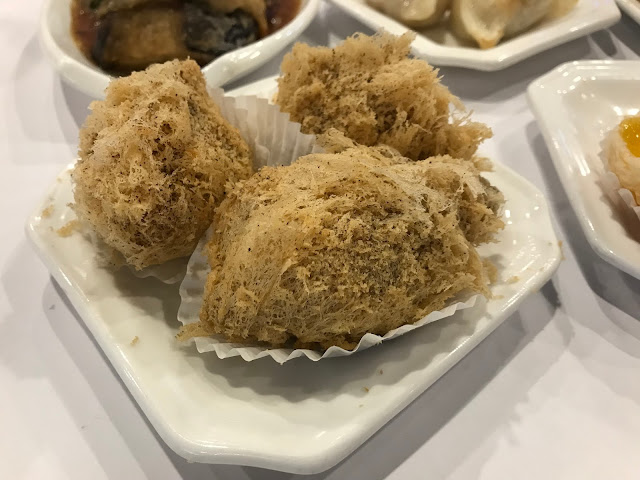 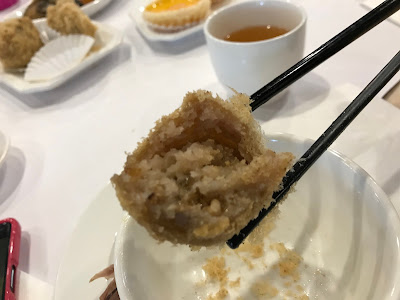 Started off with one of my all time favourites, deep fried taro dumplings. Bit into it to find the dumpling merely lukewarm, and the fillings to be quite lacking. 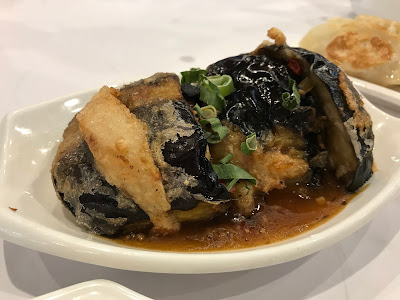 Next up was Tomcat's favourite, deep fried eggplant with gravy. Whilst it was deepfried, the batter wasn't overly thick, but nor was it crispy. The gravy had a good texture though and clung to the eggplant to give it the needed flavours. 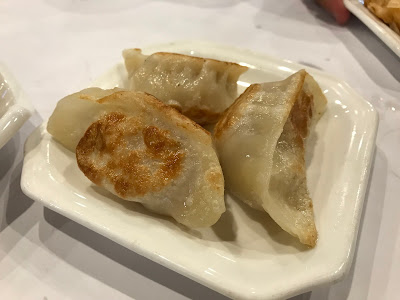 Next up were the pan fried dumplings. They were caramelised quite well, not overdone and not underdone, but the skin was very thick, and the fillings lacked the prerequisite soup. 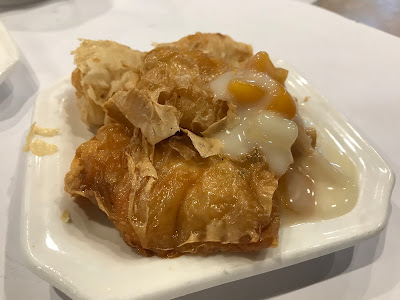 Next up we had the deep fried prawn tofu wraps, served with the standard fruit salad and sweet mayonnaise. The serve was pretty standard, tofu skin was thin and reasonably crispy. Sauce was as always a little too sweet for me, so I brushed most of it off, but it was reasonably enjoyable. 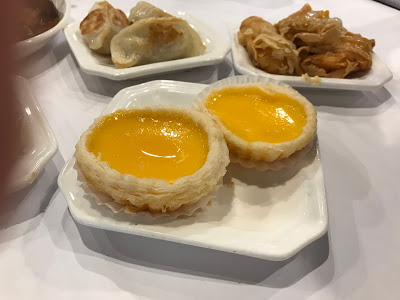 Last but not least of the pastry dishes, was the ever popular egg tart. From the sinking of the custard, you can already tell that these were not freshly baked, as they usually puff up or at least lie flat when they come out of the oven. I found them to be a little underdone, as the pastry needed a little more browning, but texture and sweetness levels were sufficient. 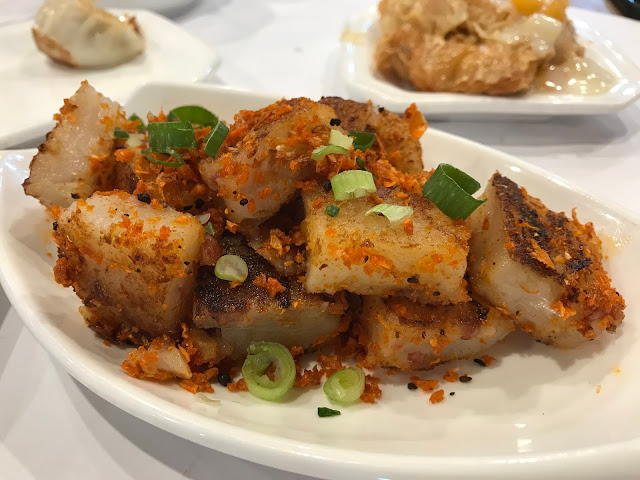 Next up we had a dish of stir fried turnip cake. It was definitely different from the usual pan fried serving, being considerably larger, and spicier. In fact it was so spicy that I found it covered the taste of turnip and meats in the turnip cake, but I have to admit, the crunch was a novel touch. 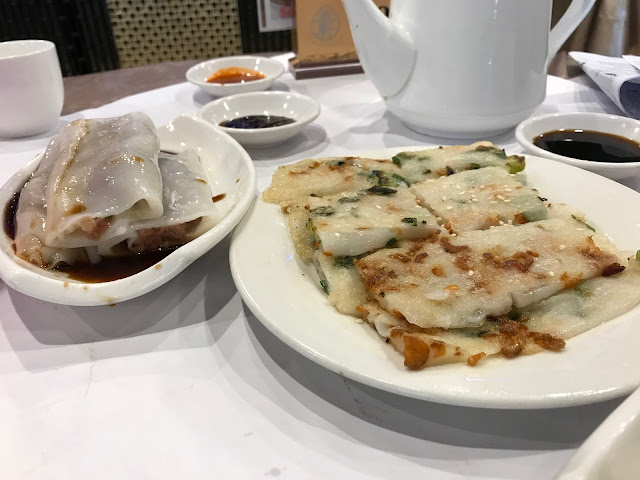 After the novelty of the stir fried turnip cake, we wanted something more traditional, so we got the rice paper rolls. 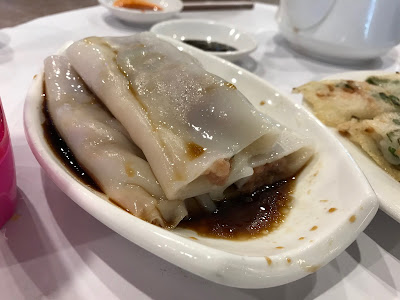 First up was the beef rice paper rolls, and although the skin could have been a little thinner, there was a certain homey comfort to eating them. The beef was well seasoned and tender, and the skin whilst thick was still reasonably soft. 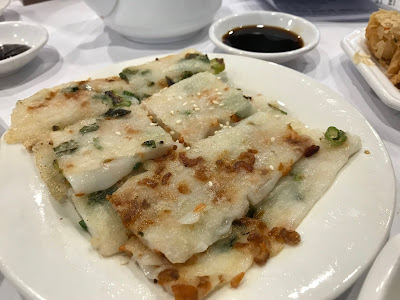 Next up was the pan fried rice noodle. Compared to the steamed one, this clearly lacked the element of softness, and there weren't enough toppings in it to provide sufficient taste to the rolls. 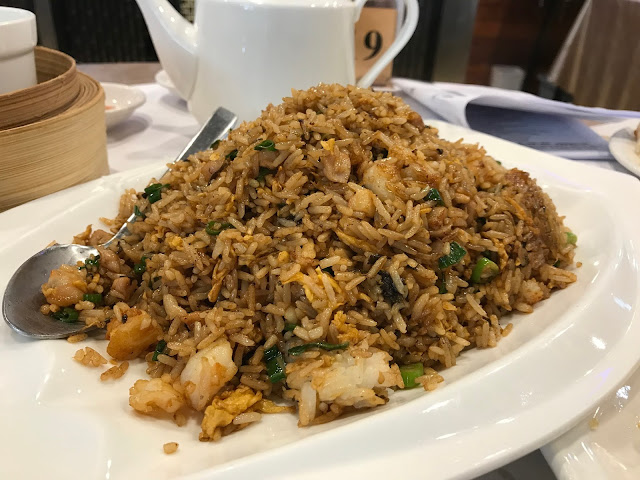 From the rice and noodle menu, we had two dishes, first up was the signature Golden Lane Fried Rice. The portion size was considerable, and we were impressed, but toppings were a little limited, but supplemented by dark soy sauce. We all agreed it erred on the oily side. 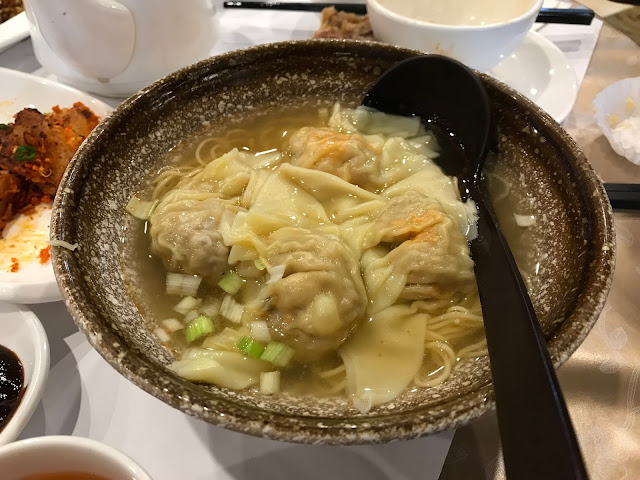 Last dish in the meal was the wanton noodle soup. The wantons were in itself quite good, and filled with meat and prawns, with a thin egg based skin. Unfortunately though the noodles were overcooked and quite soggy.