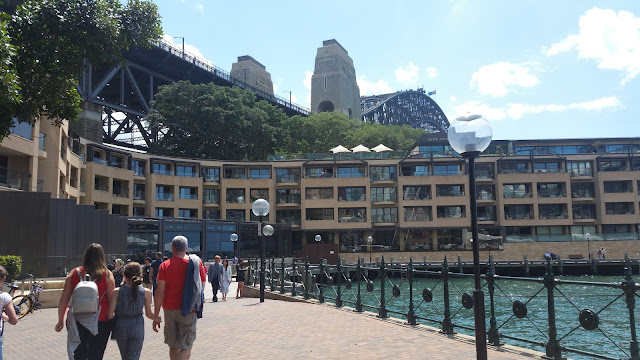 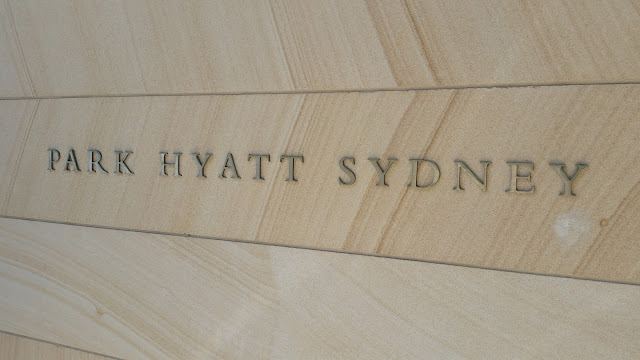 For years, I have attempted to live a frugal life of simplicity and moderation, but for some reason, I seem to be surrounded by those who life lavish and opulent lifestyles. No, today I am not talking about Iron Fist, who was almost a thousand kilometres away when I had this meal, but Queen V, who decided that our trip to Sydney would not be complete without lunch at Park Hyatt. So we walked all the way across town to get there at our allotted time. 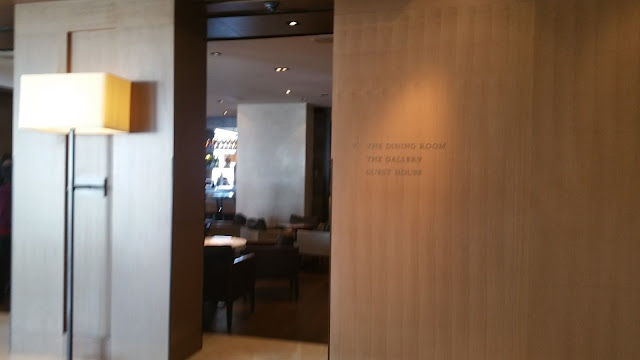 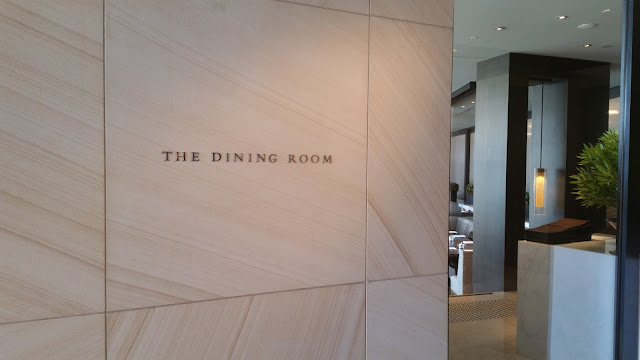 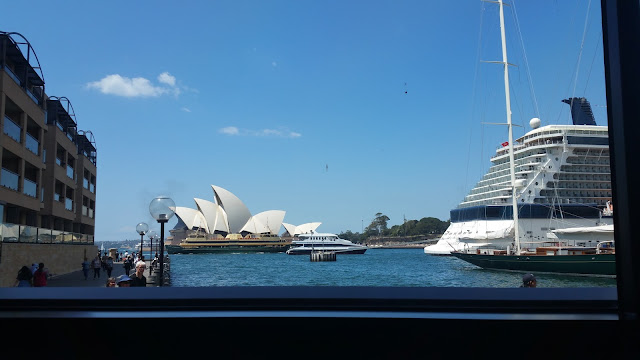 After being ushered in, we were given a window seat, and the view was spectacular. 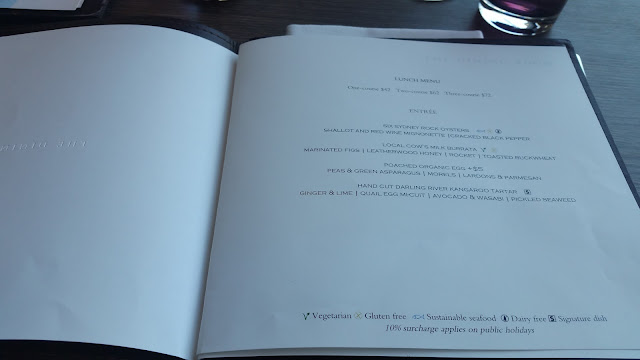 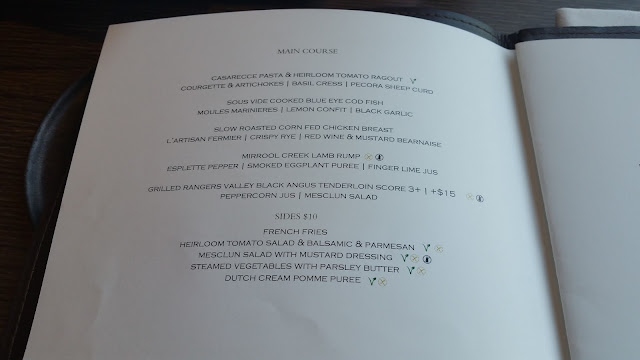 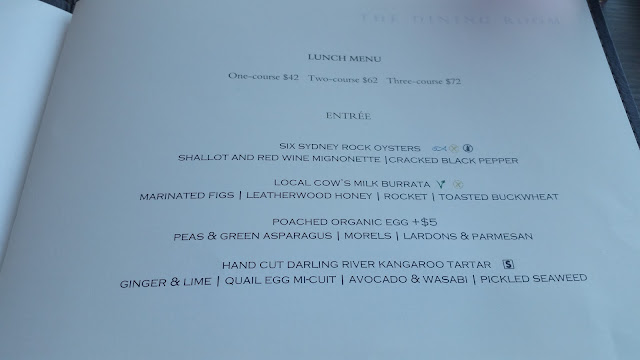 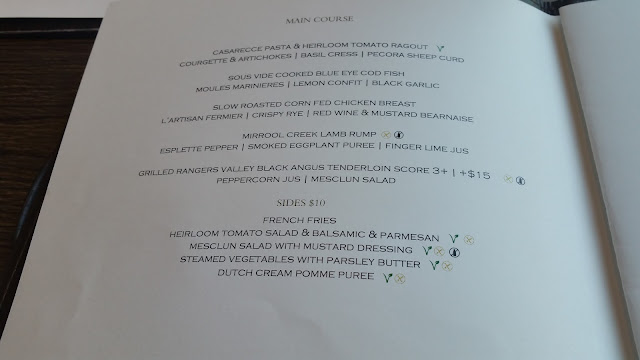 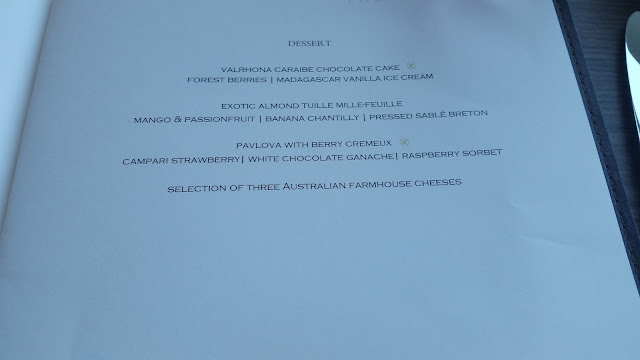 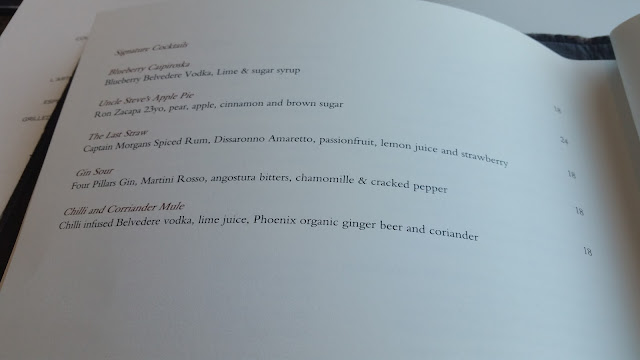 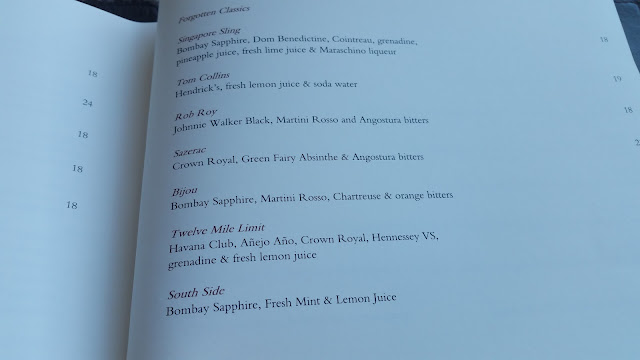 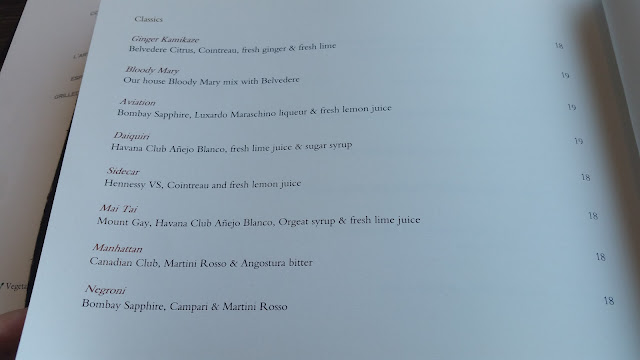 The menu was short, but elegant, and contained all elements that one would want. Queen V was set on trying out the degustation, but that was no longer on the menu, so we settled to order a la carte. 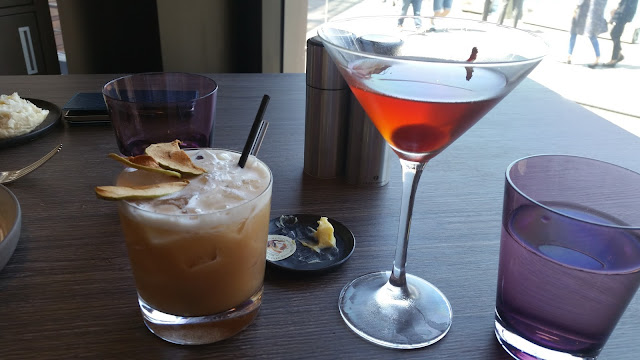 Of course a meal like this would have to be started with cocktails. So Queen V and I indulged and ordered one each. 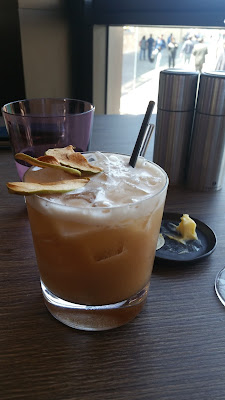 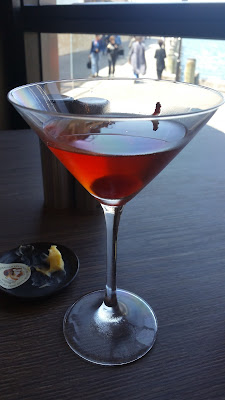 She ordered Uncle Steve's apple pie, containing Ron Zacapa 23, pear, apple, cinnamon and brown sugar. Without being actually apple pie, it contained all the essential elements of one, and whilst cool, gave a hearty warm feeling as it went down. Wanting to try something new, I opted for the sleek and elegant Manhattan, containing Canadian Club, Martini Rosso and Bitters. It was definitely harder hitting than the apple pie, with a sharp tang of Vermouth and Whisky. The cherry kept it a little sweet, and it was certainly a unique experience. 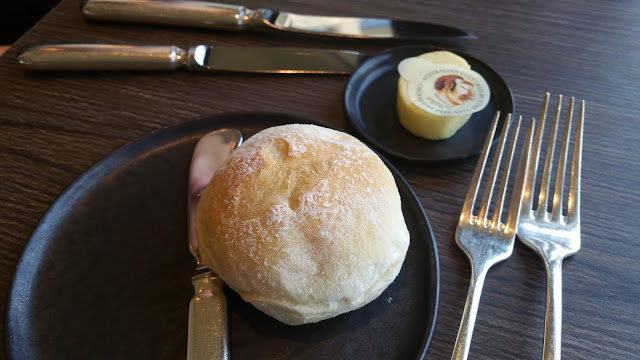 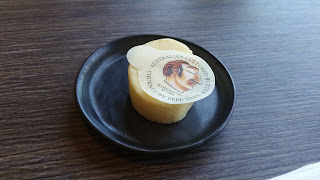 Complimentary bread was also brought to our table. It was delightfully warm, and came with some locally churned butter. The buns were not particularly crusty or hard on the outside, but were very fresh and fluffy inside and out, like little pillows of soft goodness. The butter had a wonderfully spreadable texture, despite being lightly chilled, and it had the perfect amount of salt to it. I really enjoyed it. 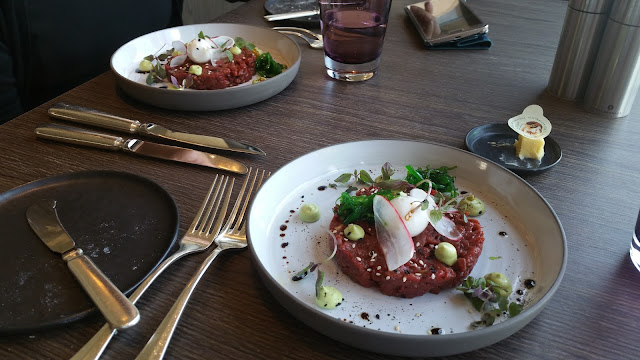 Our entrees soon came after. Normally we would opt for different dishes to allow us to try some of each others, but after consideration, we both agreed that we wanted nothing more than to have a dish of Kagaroo Tartare each, which is what we did. 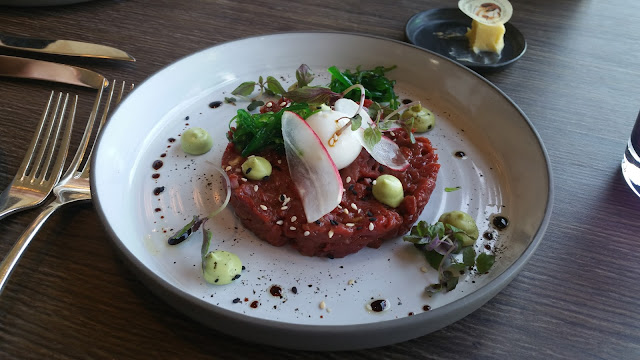 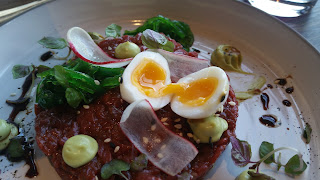 Despite our hesitations, this was not a decision we regretted. Served with ginger and lime, quail egg, avocado and wasabi as well as a small side of seaweed, it was a masterpiece. The kangaroo was perfectly lean and tender, infused with a sharp tang of ginger and lime, there was no expected gaminess at all. The quail egg was cooked just right with a slight runny yolk in the centre and firm whites. Wasabi avocado was novel to me, and it was both creamy as it was spicy, coupled with the wakame, the dish had a very Japanese theme to it, which I enjoyed immensely. 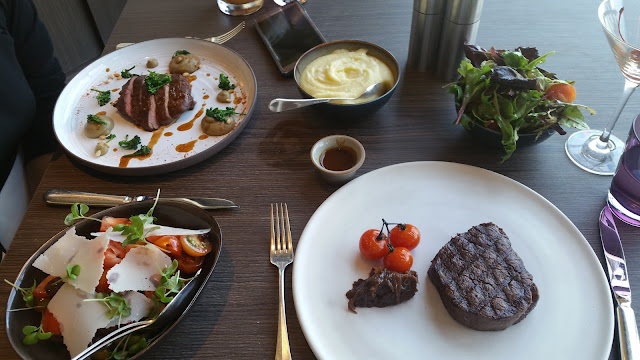 A short while after we finished our entrees, the rest of our meal came, and it was a grand sight to behold indeed. 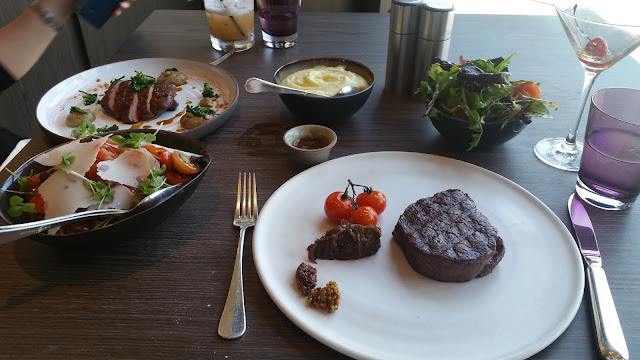 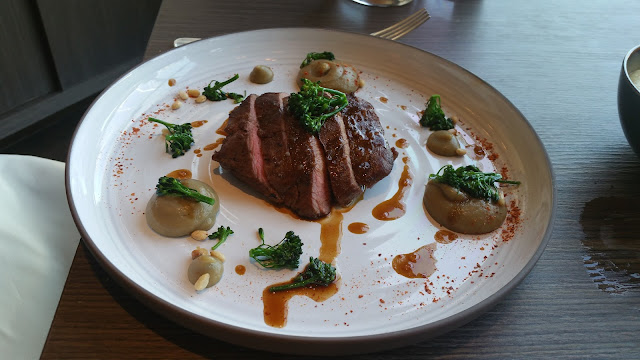 Queen V's pick of the mains was the Mirool Creek Lamb Rump, which came with eggplant puree and finger lime jus. Steering clear of the eggplant puree, I tried some of the lamb and it was aged wonderfully with a robust smoky taste to it. Being seasoned with the finger lime jus, there was a delightful sharp tang to it, and although Queen V opted for a more well done rump than I would have preferred, there was no detraction from the wonderful texture that it provided. 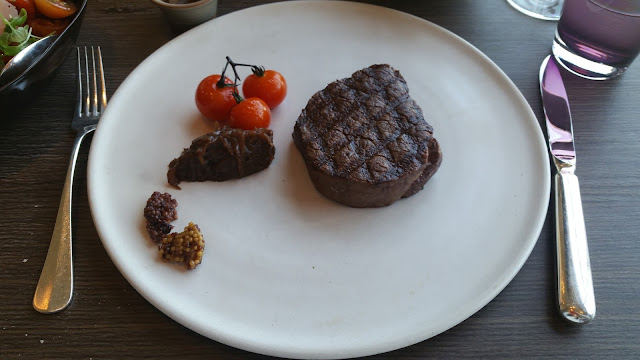 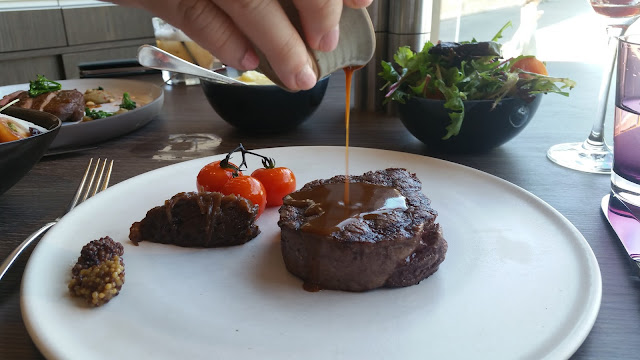 Before I even opened my mouth, Queen V knew that I was going to order the Grilled Rangers Valley Black Angus Tenderloin, which came with a peppercorn jus. Whilst the steak was somewhat small, it was cooked perfectly rare, and as the waiter mentioned, although it wasn't highly marbled, that is no indication of the quality of the meat, which was a definite premium cut. Adding peppercorn jus to it was wonderful, but sampling the mustards as well took it to a new level. It was incredible. 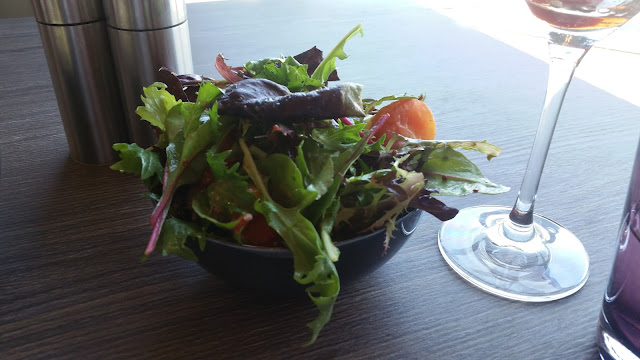 My steak came with a side of Mesclun Salad, which we shared. It was lightly seasoned with a sharp vinegarette. The baby leaves were very crisp and scrumptious, balancing out our meaty mains. 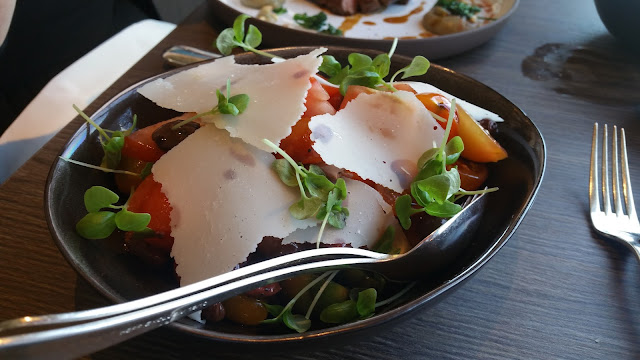 With her love of salad, Queen V also ordered a side of Heirloom Tomato Salad. This came with Parmesan and balsamic. Compared to the basic Mesclun salad, this had a lot more dimension to it. The Parmesan was hard and nutty in taste, with a slight bitter aftertaste, whilst the heirloom tomatoes came with their signature smokey earthy taste, which we both enjoyed. 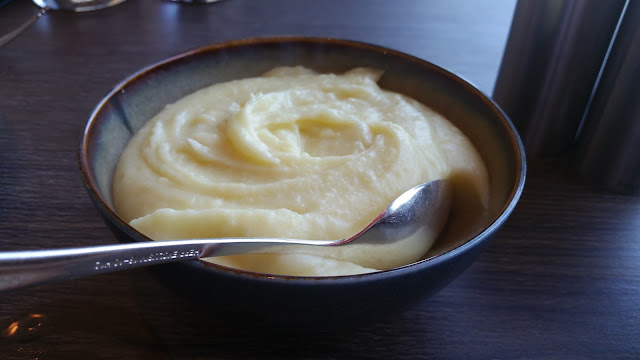 Of course, we couldn't resist the urge to also load up on carbs, so we had a side of Dutch Cream Pomme Puree. It came wonderfully smooth, creamy and dense with a rich buttery taste. It soaked up the meat juices from our respective steaks and filled us up considerably.


Although we both wanted to try the dessert menu, we agreed that given our afternoon tea plans, this would be too much, and the meal was already perfect as it was. Will be back next time for the desserts though.