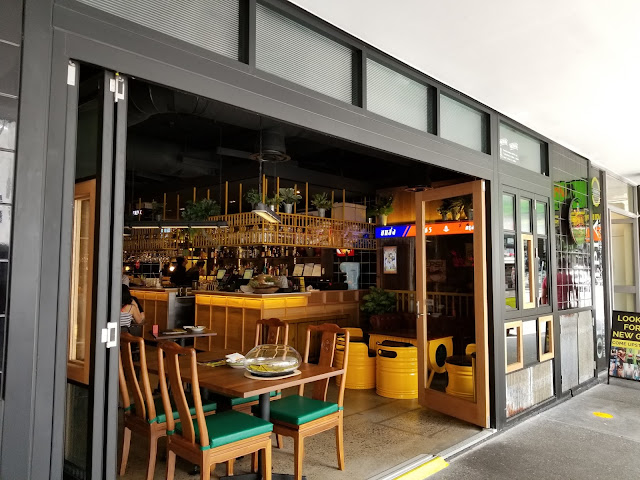 Readers who go frequent the CBD or social media a lot would not have failed to notice the opening of Pochana, along Elizabeth Street near the new cinemas. Created by the owners of Kinn Thai, we were assured of the standard that it would set and so I made plans with my much respected food reviewers, Brisvegustation one lunch to try it out. 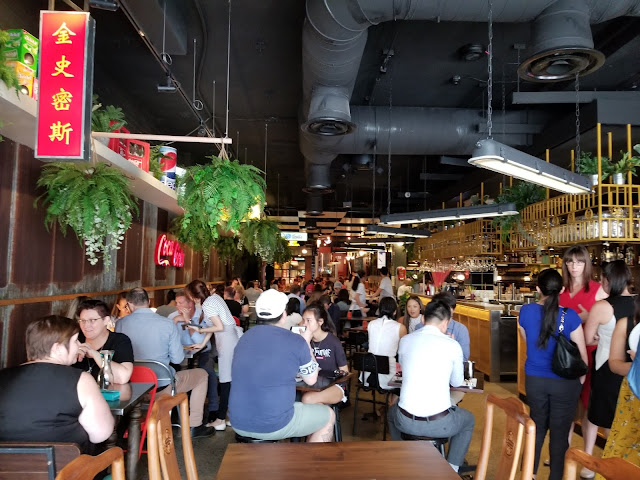 Having previously watched as the place was in a state of construction, I already noted the street food vibes and the neon hawker signs on the side. I had (incorrectly) hoped that this would be like a miniature 8 street with multiple vendors, but the setting was similar although there was just one vendor. 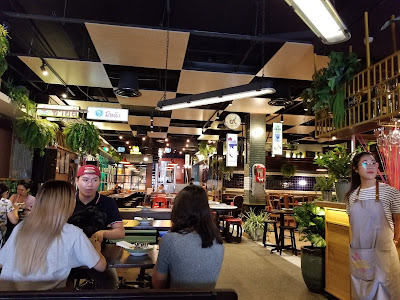 As usual, I opted to arrive before the lunch rush at a prompt 11.45am before the crowds started to fill up. We were able to easily find a table, but by the time we left, there was a considerable line out the door. 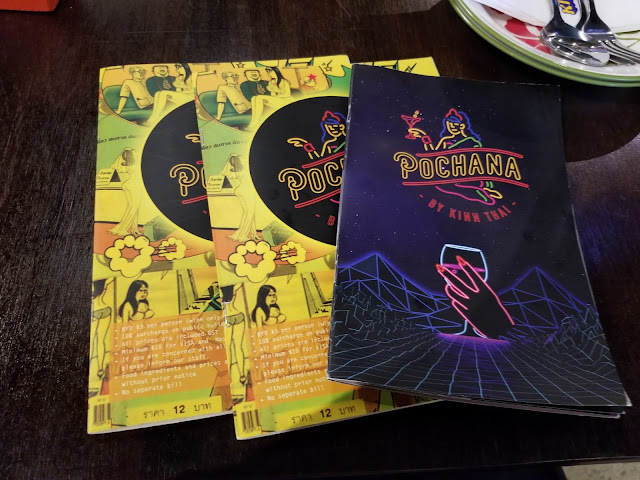 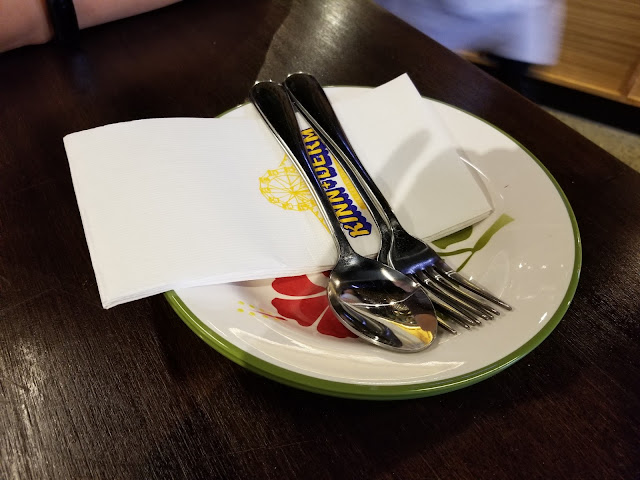 Menus and plates were already set on the table at our arrival. Chopsticks were noticeably absent though. 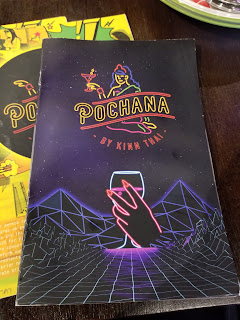 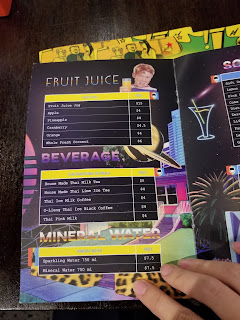 The drinks menu was surprisingly extensive, comprising of quite a few alcoholic concoctions, traditional Thai drinks and standard soft drink and juice options. In the absence of our favourite alcoholic Tomcat, Brisvegustation and I settled for far more sensible, responsible options like the adults that we were that had to go back to work after the meal. 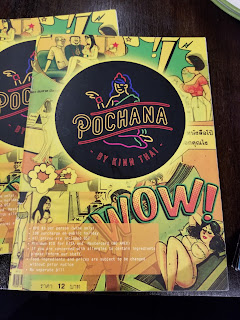 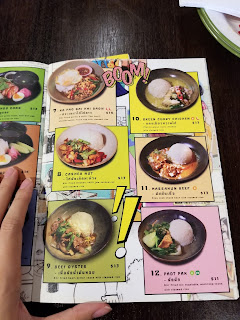 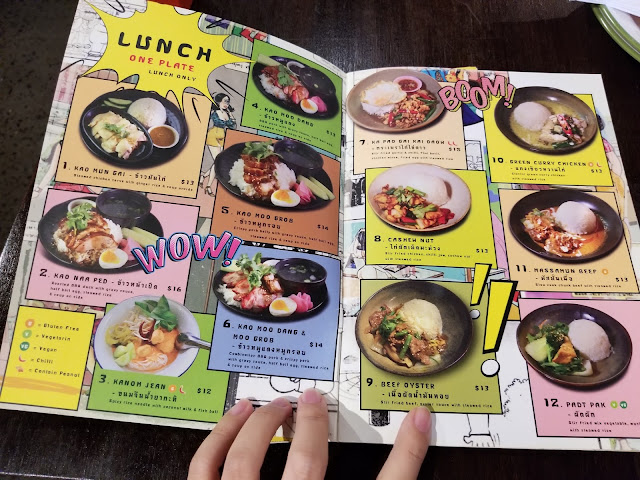 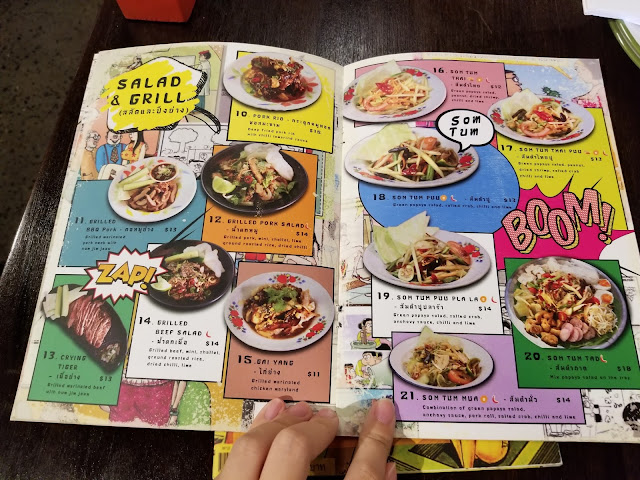 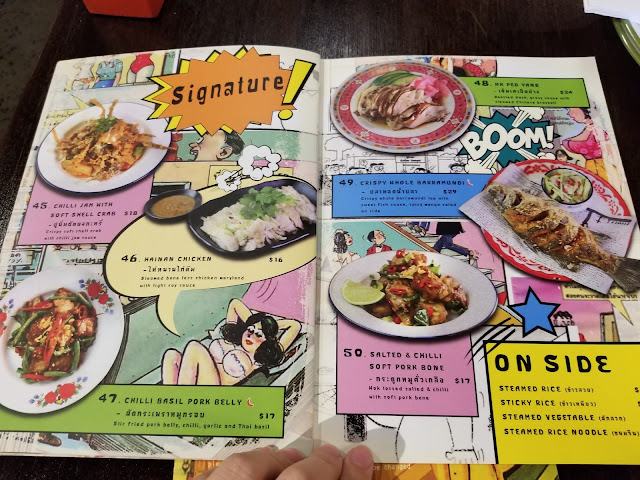 The food menu was just as extensive as the drinks menu, and I found the comic book theme to be very cute. It covered a wide range of options, not limited to rice, noodles, salads and mains. Being the super organised foodie that he is, Brisvegustation and I had already perused the menu the day before and so making our order was quick and sweet. 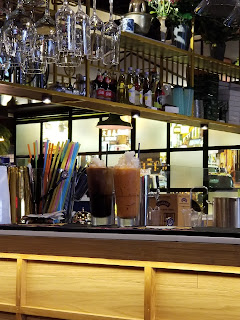 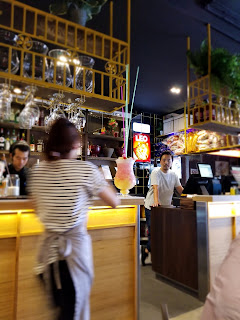 Sitting at the table next to the bar meant that we were able to get a good look at our drinks being prepared, but what we were super impressed with was the very large vase sized concoctions which were also being served. No doubt something that Tomcat or Iron Fist would be able to down solo, but for us mere mortals, coffee and tea will do. 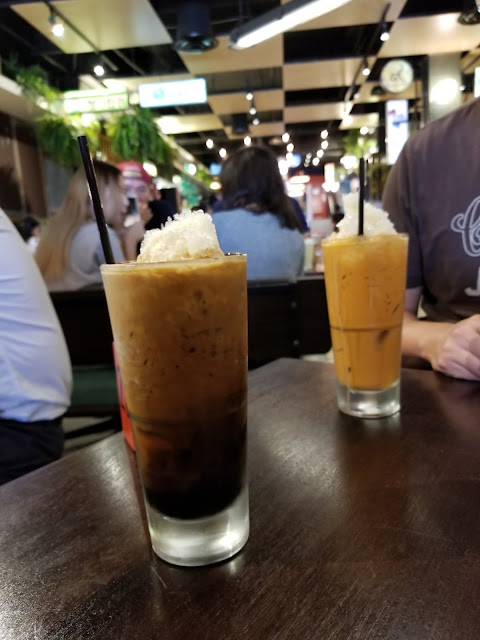 Which is exactly what we did. Brisvegustation got the Thai Iced Milk Tea, whilst I got the Thai Iced Coffee. Having made enquiries about sugar and ice level we learned that both were already pre fixed, so we couldn't alter it. As such, my coffee, although quite strong and refreshing, was served a little sweeter than I would have usually enjoyed. The condensed milk was rich and creamy, but very sweet. 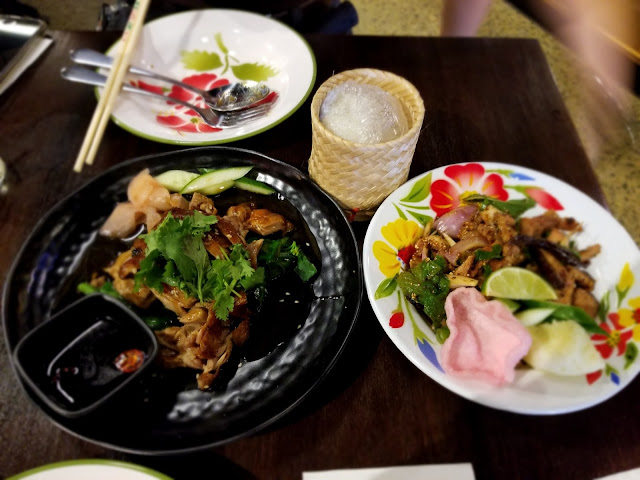 After a short while, our food came. 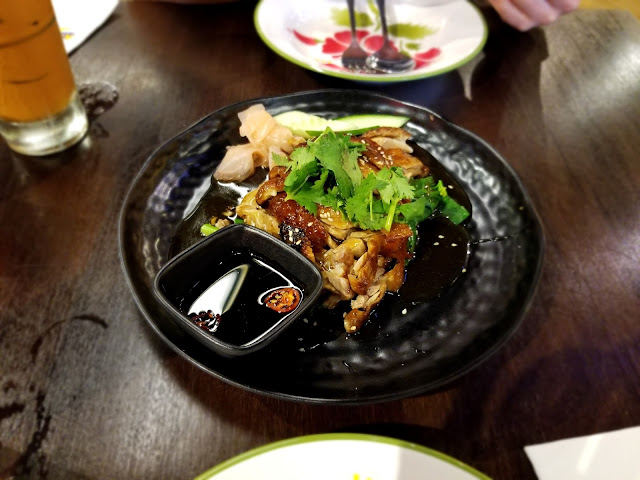 First up was the MK Ped Yang, a Roasted duck in gravy with Chinese Veges. This was my favourite dish of the day. The duck had a wonderfully crispy skin, and was served tender and boneless. The sauces were soy based and moderately sweet, but didn't make the skin go soft. The duck itself was quite well seasoned, and the flavours permeated well in to the flesh, and we really enjoyed it. For the price though, I don't consider the portion to be good value for money. 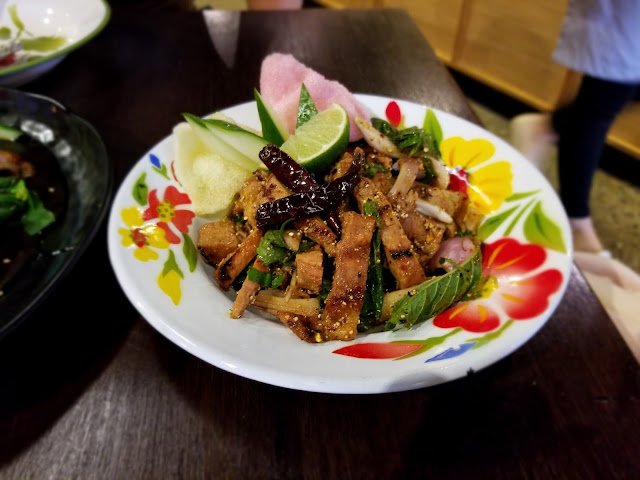 Our second dish was the grilled pork salad. Not being familiar with Thai salads, I was expecting something along the lines of Vietnamese girlled pork salad, with the usual sweet and sour fish sauce, but this couldn't have been further from my expectation. The dish was extremely spicy (by my not very spice tolerant standards), and really pushed the boundaries of my heat tolerance. The pork was well grilled with a caramelised exterior and strongly peppered exterior. The lime gave it some extra sharp bite which I found very refreshing and invigorating. 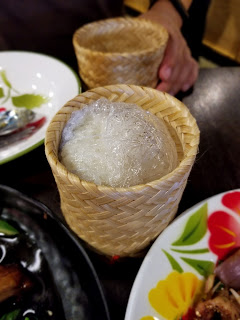 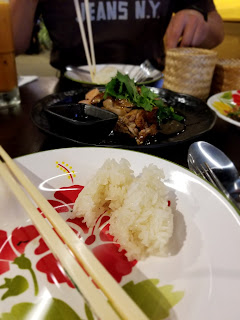 As the duck and salad didnt have any rice or noodles to go with it, we also ordered a serve of sticky rice to share. It was served in a woven basket with the rice wrapped in cling wrap. We found it to be a little concerning that the whole thing appeared to have come straight out of the steamer, as the wrap had started to melt, which posed a bit of a worry to us. As for the rice, it was very sticky and fragrant, but the texture was decidedly very hard, which wasn't too appealing for us.